Go back to "Antiquity"

Zeus, Mount Olympus and Tempe… or somewhere between myth and reality

Views are a rarity in the historical atlas by Ortelius. Even then, one would have expected an illustration of antique Jerusalem, Athens or Rome, but this was not the case. This illustration combines myth and reality. The Tempe Valley really exists and it forms a 10 km gap around River Pineios (after the God Peneus), which separates Thessaly of Macedonia: 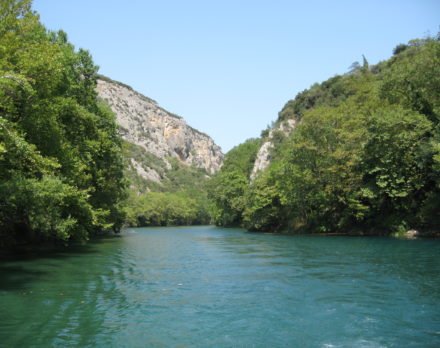 Enthroned above Mount Olympus, we find the seat of Zeus and the Greek gods. Mount Olympus rising to 2.918 meters is the highest mountain of current-day Greece. The origin of the name “Olympus” is unknown and it is probably pre-Greek. Homer refers to Mount Olympus as the seat of the Greek Gods (in general terms) and not to an identifiable or specific location. On the mountain peak and in the valley Ortelius shows the altar and the temple of Apollo, son of Zeus. Ortelius refers to “Jovis ara” or Jupiter, the Roman counterpart of Zeus.

In ancient times, it was celebrated by Greek poets as a favorite haunt of Apollo and the Muses. The paradise of Tempe was an historical place of culture, care and lust. On the river banks grows the laurel tree, whose leaves were used to make the victory wreath for the winners at the Pythian games in Delphi. Ortelius drew his data for this view from Ovid, Herodotus, Aelian, Plinius, Herodotus  and Varro. Ortelius incorporated this sight for the first time in 1590, but this print comes from the Latin version of B. Vrients from 1609.

In the lower right corner, the brilliantly decorated cartouche reads: