Go back to "XVII Provinces"

Condition:  Very good copper engraving. Margins cut to the plate mark, with some very minor fraying along lower part. Professionally repair of a tear 5 cm into engraved area  of the middle lower medallion, next to the center fold. A very good and dark impression. Very good condition. Colored outlining of the provinces.

Only one copy known: price on request

Unless otherwise specifically stated on this map page, we charge the following expedition costs in euro:
– Benelux: 20 euro
– Rest of Europe: 30 euro
– Rest of the World: 50 euro
Share:
View it on:
Questions about this map?
Our commentary

It is well-known that the ‘Leo’ maps are a symbol of strength and bravery in their heraldic representation. The series of Leo-maps should be placed in the context of the Eighty Years’ War or “Dutch War of Independence” (1566-1648). They symbolized the revolt of the Seven United Provinces of the Netherlands against the Spanish (Habsburg) Empire.

The year of 1641 marked a turning point in the “Dutch War of Independence”. On 27 July 1641, Frederick Hendrik captured the town of Gennep in the provence of Geldern.

In the same year general peace negotiations were initiated in the catholic city of Münster, and the prostestant city of Osnabruck, including the main participants in the Thirty Years’ War: France, Sweden, Spain, the Emperor and the Republic.

Though not formally recognized as an independent state, the Dutch republic was for the first time allowed to participate in these peace negotiations. Even Spain did not oppose to this.
The drafting of the instructions for the Dutch delegation occasioned spirited debate. Holland made sure that it was not barred from their formulation.

The Dutch demands eventually agreed upon were:
• cession by Spain of the entire Meierij district;
• recognition of Dutch conquests in the Indies (both East and West);
• permanent closure of the Scheldt to Antwerp commerce;
• tariff concessions in the Flemish ports; and
• lifting of the Spanish trade embargoes.
In the meantime the war continued, although the heartland of the republic was no longer threatened. The war ended finally in 1648 with the Peace of Münster. The Dutch Republic was officially recognised as an independent country.

The invitation in 1641 and/or the outcome of the negotiations must have inspired Claes Jansz. Visscher to publish this updated version of the Leo map. It can be seen as the birth certificate of the new nation.

Genesis of this map

A) In 1598 Joannes van Doetecum Jr. made a Leo Belgicus, in carte-à-figures format. He dated the map 1598 and placed two ships In the top left corner, just under the title “Leo Belgicus”.

B) In 1630 van Doetecum died and Henricus Hondius acquired the copperplate which he reprinted with minor changes: he put his own monogram and replaced the date to 1630.  He also updated the coat of arms of England. Although Prince Maurice and the Archduke Albert had already died, the captions below their medallions remained unchanged. Prof. G. Schilder recorded two copies of this map.

C) Hondius died in 1650. So far it was assumed that the next and last state was the one by Claes Jansz. Visscher of 1650. He made a few crucial changes. The most obvious one is the replacement of the ships by the medallions of Archduke Ferdinand (Governor 1634-1641, date of his death) and of Prince Frederik Hendrik of Orange (Stadtholder 1625-1647). [The stadtholder or head of state was the replacement of the duke or earl of a province during the Burgundian and Habsburg period (1384 – 1581/1795).] A full analysis of the map follows below.

SO FAR, SO GOOD and then….came this map.

According to previous belief, Visscher added in 1650 the portraits of Archduke Ferdinand and of Prince Frederik Hendrik of Orange, two persons who had died years before. This is a bit odd. 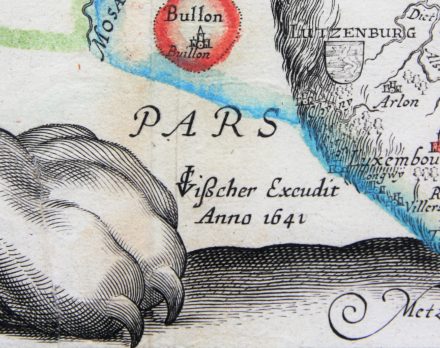 With the discovery of this example of Visscher’s edition, with the date 1641, it becomes much clearer why Visscher dated the map 1641 and why he THEN added the medallion portraits of Archduke Ferdinand (Governor 1634-1641) and Prince Frederik Hendrik of Orange (Stadholder 1625-1647) to the plate. In 1641 both of them were still alive and much more, they were the key negotiators on the Dutch independence.

This fact was also recorded in the updated panels (bottom left in Dutch and same text in bottom right in French). The last lines of the Dutch text now read: (…) ende hooggeborene Ferdinandus Infans Cardinael en de Edelen en meer dan Martium Frederik Hendrick die beyde tegenwoordelick regiere. (last three words: “who both currently govern”). So Ferdinand was still alive at the date of publication (note: he died in 1641). Why would Visscher publish alter a map in 1650 with this incorrect information? There is no reason for. Please click on the specific picture (not this one below) in the gallery and zoom in on the text. 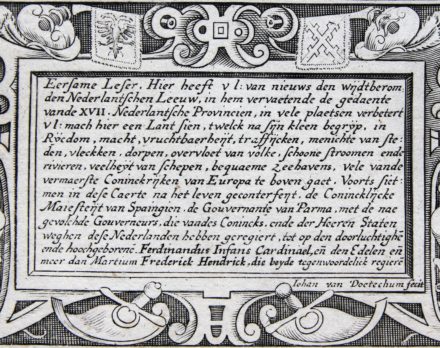 To insert these new portraits (top left) the large title “Leo Belgicus”had to be moved, made smaller and broken off: “LEO BEL: GICUS”. The tail of the lion was shortened and lowered.

Other changes included the adornment of the sea, which was changed completely and was now filled with nine vessels. Outside the lion’s shape three names were added: DE NOORT ZEE, DE HOOFDEN and GERMNANIAE PARS.

It is interesting to note that the lower square panel at the right, which gives the towns and villages per province, was left unchanged since van Deutecum’s first map of 1598.

The Lion now stands on a hatched base. It looks like Visscher wanted to say that the the Republic finally had found grounds.

This edition (of 1641) is there for the most important edition of all Leo Maps and being the birth certificate of an Independent Country!

The House of Orange-Nassau, Frederik Hendrik up to Willem-Alexander

Frederick Henry, or Frederik Hendrik in Dutch (29 January 1584 – 14 March 1647), was the sovereign Prince of Orange and stadtholder of Holland, Zeeland, Utrecht, Guelders, and Overijssel from 1625 to 1647. As the leading soldier in the Dutch wars against Spain, his main achievement was The successful Siege of ‘s-Hertogenbosch in 1629, It was the main Spanish base, and a well-fortified city protected by an experienced Spanish garrison, and by formidable water defenses. Other sieges and captures are those of Grol in 1627, of Maastricht in 1632, of Breda in 1637, of Sas van Gent in 1644, and of Hulst in 1645.  He was the younger brother of Maurits, and a far more capable statesman and politician. For twenty-two years he remained at the head of government in the United Provinces, and in his time the power of the stadtholderate reached its highest point.

The “Period of Frederick Henry,” as it is usually styled by Dutch writers, is generally accounted the golden age of the republic. It was marked by great military and naval triumphs, by worldwide maritime and commercial expansion, and by a wonderful outburst of activity in the domains of art and literature.

It was William I, born Willem Frederik Prins van Oranje-Nassau (24 August 1772-12 December 1843), who was a Prince of Orange and the first King of the Netherlands in 1815. William III of The Netherlands, who reigned from 1849 until 1890 was the last King and since then, the Netherlands have only had queens on the throne, and no Kings. Willem-Alexander is the First Dutch King in 123 years when he took over the throne on 30th April of 2013.

8 Palatium Bruxellense and Palatium Comitu Holland. These are the palaces at the Coudenberg in Brussels and the of the Binnenhof in The Hague.