Unless otherwise specifically stated on this map page, we charge the following expedition costs in euro:
– Benelux: 25 euro
– Rest of Europe: 40 euro
– Rest of the World: 60 euro

This item is sold

All about sea monsters

This unique map is from the rare Italian version in 1608, but had originally been recorded since 1590 in the atlas. In detail, rivers, mountains and fjords displayed. Note the spewing volcano “Hekla” also a potential nightmare for us and future generations. Ortelius wrote in Latin: “Hekla, forever condemned to storms and of snow, vomits stones with a terrible sound.”

The sea monsters are identified with letters, which are keyed to the explanation on the verso, which provides as follows (translated to English):

A. is a fish, commonly called NAHVAL. If anyone eats of this fish, he will die immediately. It has a tooth in the front part of its head standing out seven cubites <= fore-arms>. Divers have sold it as the Unicorn’s horn. It is thought to be a good antidote and powerful medicine against poison. This monster is forty ells <= fore-arms> in length.

B. the Roider is a fish of one hundred and thirty ells in length, which has no teeth. The flesh of it is very good meat, wholesome and tasty. Its fat is good against many diseases.

C. The BURCHVALUR has a head bigger than its entire body. It has many very strong teeth, of which they make chess pieces. It is 60 cubites long.

D. The Hyena or sea hog is a monstrous kind of fish about which you may read in the 21st book of Olaus Magnus.

F. The English whale, thirty ells long. It has no teeth, but its tongue is seven ells in length.

G. HROSHUALUR, that is to say as much as Sea horse, with manes hanging down from its neck like a horse. It often causes great hurt and scare to fishermen. 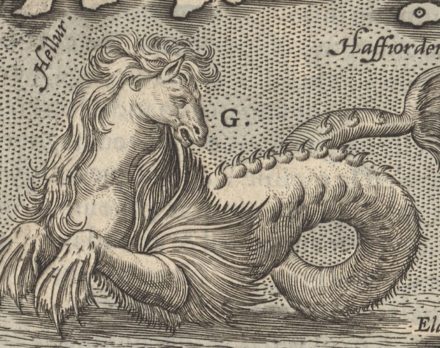 H. The largest kind of Whale, which seldom shows itself. It is more like a small island than like a fish. It cannot follow or chase smaller fish because of its huge size and the weight of its body, yet it preys on many, which it catches by natural cunning and subtlety which it applies to get its food.

I. SKAUTUHVALUR. This fish is fully covered with bristles or bones. It is somewhat like a shark or skite, but infinitely bigger. When it appears, it is like an island, and with its fins it overturns boats and ships.

K. SEENAUT, sea cow of grey colour. They sometimes come out of the sea and feed on the land in groups. They have a small bag hanging by their nose with the help of which they live in the water. If it is broken, they live altogether on the land, accompanied by other cows.

L. STEIPEREIDUR, a most gentle and tame kind of whale, which for the defence of fishermen fights against other kinds of whales. It is forbidden by Proclamation that any man should kill or hurt this kind of Whale. It has a length of at least 100 cubites.

M. STAUKUL. The Dutch call it Springual. It has been observed to stand for a whole day long upright on its tail. It derives its name from its leaping or skipping. It is a very dangerous enemy of seamen and fishermen, and greedily goes after human flesh.

N. ROSTUNGER (also called Rosmar) is somewhat like a sea calf. It goes to the bottom of the sea on all four of its feet, which are very short. Its skin can hardly be penetrated by any weapon. It sleeps for twelve hours on end, hanging on some rock or cliff by its two long teeth. Each of its teeth are at least one ell long and the length of its whole body is fourteen ells.

P. Blocks and trunks of trees, by force of winds and violent tempests torn off by their roots
from the cliffs of Norway, tossed to and fro, and surviving many storms, finally cast upon and coming to rest at this shore.

Q. Huge and marvellously big heaps of ice, brought here by the tide from the frozen sea, making loud and terrible noises. Some pieces are often as big as forty cubits. On some of these, white bears sit together, watching the innocent fish play about in exercise.

The dedication in the lower right corner notes that the map is drawn up and dedicated by Andreas Velleius to the Illustrious and powerful Frederic the Second, King of the Danes, Norwegians, Slavs, Goths etc., his most merciful Majesty.

The sources for this map are Guðbrandur Þorláksson bishop (1542-1627) and Anders Sorensen Vedel (1542-1616) which their information about probably made by Heinrich von Ranzau to Ortelius. Vedel was an important Danish historian of the period who prepared, but apparently never published a treatise on history of Denmark, which he had intended to illustrate with maps. However, it is almost certain that Vedel was not the maker of the map and simply transmitted the map to Ortelius. The more than 200 topographical names have primarily a Danish origin.

The map is a vast improvement over all prior maps of Iceland and it is believed therefore that it could only have been drawn by an Icelander, most likely Gudbrandur Thorlaksson, Bishop of Holar, who studied mathematics and astronomy in Copenhagen. It is known that Thorlaksson made a map of the region in 1606. While no map of Iceland by Thorlaksson survives, there is other circumstantial evidence, including a list of churches and fjords which was available and perhaps prepared by Thorlakson, which were almost certainly used in preparing the map. While a privilege for the map was granted in 1585, the map first appeared in the 1587 French edition of Ortelius’ Theatrum Orbis Terrarum, the first modern Atlas of the World, first issued in 1570 and expanded thereafter until 1612.