Go back to "Southeast Europe"

Its modern name derives from ancient Greek mythology, specifically the legend of the hero Pelops. He was said to have conquered the entire region. The name Peloponnesos means “Island of Pelops”. During the Middle Ages, the peninsula was known as the Morea. According to folk etymology, this is because the Crusaders found it densely planted with mulberry trees (Greek: moreai) used by the flourishing silk industry.

Maps of the Peloponnese as one entity had already been published by Mercator-Hondius and Blaeu. This version by de Wit from around 1680 is special. The Peleponnese had been a contention between Venice and the Ottoman empire. It is apparent from the side views that the Peloponnese was at that time ruled by the latter: minarets are everywhere visible.

It was at Lepanto (now known by the Greek name Návpaktos) at the entrance of the Gulf of Corinth in 1571, that a large sea battle took place between the Holy League (alliance of Christian countries bordering the Mediterranean) and the Ottoman fleet. The battle resulted in no territorial shifts.

Misitra (Mistras) in all in splendid Byzantine ruins: 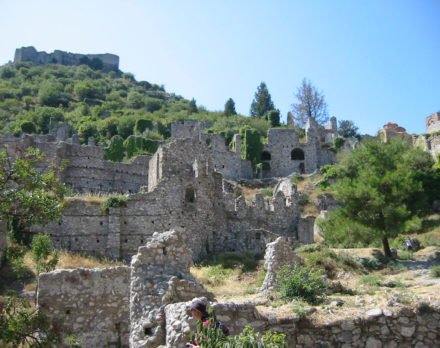 Malvasia (Monemvasia) the name of the rock  is derived from two Greek words, mone and emvasia, meaning “single entrance”: 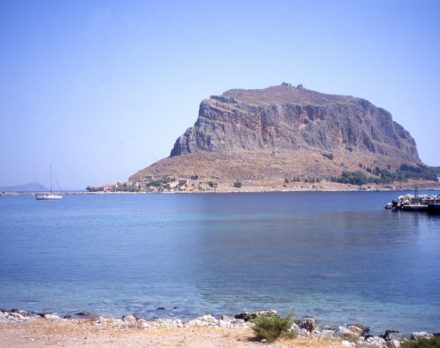