Go back to "Celestial maps"

Map of the Moon – Tabula Selenographica in qua Lunarium

The unique and famous first comparative chart of the Moon (with double competing nomenclature) from which the names of many lunar features have been derived.

From: Atlas coelestis in quo mundus spectabilis (as plate 11) by Homann’s Heirs in Nürember

Johann Gabriel Doppelmayr (27 September 1677 – 1 December 1750) was a German mathematician and astronomer. He made this first thematic map of the Moon, which was published by J.B. Homann in 1742 in his Atlas Coelestis which contained 30 celestial maps. Left Doppelmayr shows model of Johannes Hevelius; right the design by Giovanni Battista Riccioli. This model is also called the Riccioli-Grimaldi map, where the first was responsible for finding the toponyms and writing the informative text and the second for the production of the chart.

Both show the same side of the Moon. Indeed, thanks to the unsurpassed and matchless Pink Floyd, we know that there is a dark side of the moon (see first picture).

Hevelius (28 January 1611 – also 28 January 1687), a German Pole, mayor of Danzig, built his own observatory in 1641, where he also produced telescopes (see second picture). In 1647 he published “Selenographia, sive, Lunae descriptio” in which he mainly identified locations on the Moon on the basis of an alleged physical analogy with places on Earth, such as Asia Minor, Sicilia and Persia. He made also many references to the Greek and Roman antiquity. 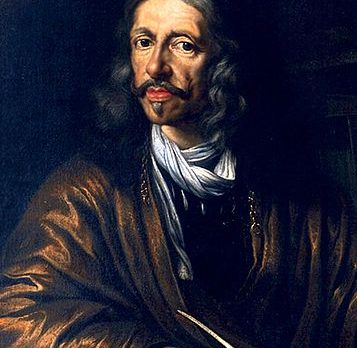 Riccioli (17 April 1598 – 25 June 1671) was a Jesuit priest from Ferrara. In 1651 he published the voluminous Almagestum Novum, an encyclopedic work in two volumes. Volume two (in its third and fourth parts) covers the Moon and its phases. Riccioli supports his topography on a nomenclature of famous people and scientists. He called certain craters to Copernicus, Galilei and Kepler. He denominated places as Ptolemy, Plato and Tycho. Both nomenclatures got mixed, but Riccioli’s input was larger.

Riccioli also referred to the “Mare Tranquillitatis” (the Sea of Tranquility; see red circle on third picture; also identifiable on the map as the middle of the three dark zones at the right of his Moon map).The darker spots on the clear side of the Moon (with its many craters) are flat zones; which makes them ideally suited for a landing…. Immediately after the landing of Apollo 11 on 20 July 1969 Armstrong informed the Flight Center in Houston: “Houston, Tranquility Base here. The Eagle has landed.” There would be 6 manned landings in total on the Moon between 1969 and 1972; the last one was Apollo 17. Of course, Apollo 13 did not make it. 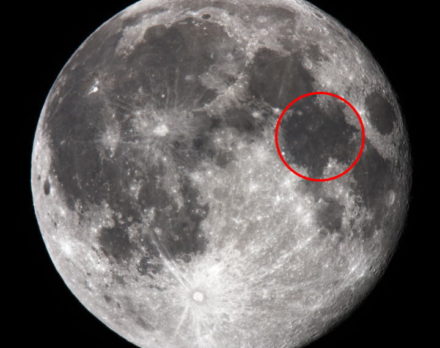 The different lunar phases are represented in the four corners. The map is further embellished with angels (one of them holding a telescope). We also notice Roman goddess of the Moon, Diana, in the right top corner. Diana was the goddess of the hunt, the moon, and nature, associated with wild animals and woodland. Due to this overload of work she delegated her Moon tasks to Luna. The Greek counterpart was goddess Selene. Hence the term “Selenography” to name the science of the surface and physical features of the Moon.

The Moon’s average orbital distance is 384.402 km. As the Earth’s diameter is 12.742 km, one could place approximately 30 earth globes between the Earth and the Moon.