Go back to "British Isles"

“Oxford, known long ago as Bellositum due to its charming position, is a city on the northern bank of the River Thames […] It is generally known that it has a salubrious and pleasant situation and also that the surrounding countryside provides everything in abundance. Oxford has a prestigious school, as all who have attended other schools in Europe will know.”

TRANSLATION OF CAPTION: Oxford, well-known town in England. Embellishes the northern bank of the Thames by its attractive, healthy location.

The view shows Oxford from the north, ensconced in a broad landscape of gently rolling hills. Oxford is first mentioned in the so-called Anglo-Saxon Chronicle in the year AD 912 and goes back to the founding of a convent by the Saxon nun Frideswide in the 8th century. Today St Frideswide is the patron saint of the city and the university. The University of Oxford is the oldest and, together with Cambridge, the most famous university in England. It developed out of several different schools, mostly monastic, whose existence is documented as far back as the early 12th century. The city’s oldest college is University College, founded in 1249.

“Windsor is a royal castle in England, which, so it is believed, was first built in the time of King Arthur and extended by King Edward III, who added many new buildings. It is situated on a charming hill, eight miles from the capital of London. It is 410 paces from the Thames, which changes its course here from south to north. The castle is surrounded by an unbelievably charming and broad plain […]. There huntsmen and the nobility go hunting with falcons.”

TRANSLATION OF CAPTION: Windsor, the famous English castle. Remarkable for its pleasant surroundings, magnificent buildings, ornate royal tombs and the famous Order of the Garter.

The engraving shows a view of Windsor Castle seen from the north. In the foreground is a group of nobles, and just below the castle walls there is a hunting scene. Windsor Castle was built under William the Conqueror around 1070. The original wooden construction was placed on a man-made hill. The Round Tower was built on the same site one hundred years later, under Henry II. In 1350 King Edward III began reconstructing the castle, which lasted a total of 24 years. On the left are the royal apartments, and on the right St George’s Chapel, built in the Gothic Perpendicular style. The annual meeting of the Order of the Garter, founded by Edward III in 1348, is celebrated in this chapel. Today Windsor Castle is one of the official residences of the British monarchy. 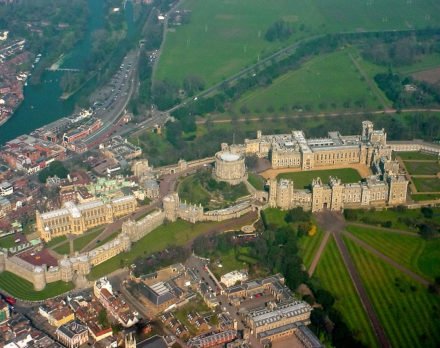