Go back to "Germany"

“Oberwesel lies on the left bank of the Rhine and was earlier under the direct authority of the Holy Roman Emperor, after in former times having been subject to the Burgraves of Schönburg. […] At the present time Oberwesel is still under the authority of the archbishop of Trier.”

TRANSLATION OF CARTOUCHE TEXT: Accurate drawing of the town of Vosavia, or Ficelia, on the Rhine, called in the German tongue Oberwesel.

This is a view of Oberwesel looking across the Rhine in a southwesterly direction. The town is built on a hill and the most prominent building is the 14th-century Gothic church of Our Lady on its outskirts. Above it to the left is the castle of Schönburg, which was expanded around 1300 and is dominated by the Barbarossa tower. The unfinished Romanesque tower of St Martin can be seen beneath the setting sun.The walls dating from the 13th-15th centuries allow space for future expansion of the city. Beside the Rhine is the towpath with horses pulling boats up the river. The imperial eagles in the town’s coat of arms indicate its status as a former Free Imperial City, which Oberwesel enjoyed in the 13th/14th centuries, before passing to the archbishopric of Trier.

Own comment: In 1220 under Emperor Frederic II Oberwesel became a free Imperial city. In 1255, Oberwesel became a member of the Rhenish League of Towns (Rheinischer Städtebund), but in 1309, it lost its status as a free imperial city and fell under the lordship of the Electorate of Trier. Today it is a leasurly town at a bend in the Rhine River and counts some 2.900 inhabitants. 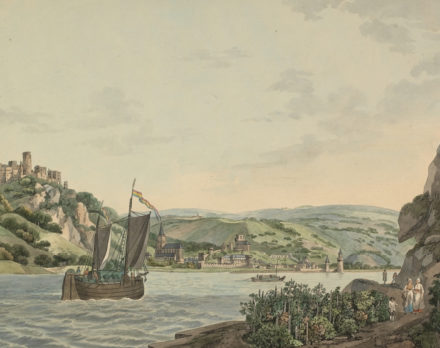 “Drusus built more than 50 castles and small towns on the bank of the Rhine, one of which was Boppard. In the opinion of many scholars this is attested by the extremely old square buildings and the round fortified structures in the walls, which however are not higher than the walls, without towers and flat on the top.”

TRANSLATION OF CARTOUCHE TEXT: The very pleasant location of the town of Bodobriga, which today is called Boppard, on the bank of the Rhine.

This view of the well-fortified town of Boppard looks towards the south from the right bank of the Rhine with the Hunsrück Foothills in the background. The walls were built in the 12th/13th centuries and replaced part of the Roman fortifications. The late Romanesque church of St Severus with its two towers rises up out of the closely packed houses in the town. To the right of it is the late Gothic collegiate church, identifiable by its thin spire. Founded in the 1st century BC as the Roman fortress of Bodobriga, and rebuilt in the 4th century AD, Boppard today has the best-preserved Roman fortifications in Germany. A Free Imperial City in the 13th century, Boppard passed to the Electorate of Trier in 1306, whose powerful Prince-Bishop Baldwin built a fortress around 1340, which is visible in the far left background, between the customs wall and the city wall. 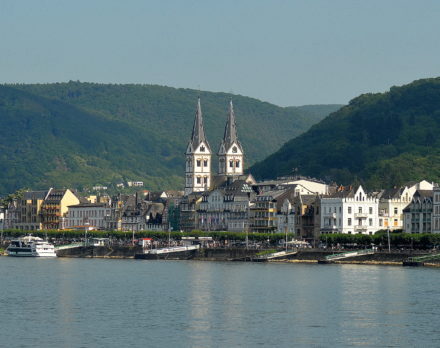 Own comment: Also Boppard had to accept the ruling by the Electorate of Trier. Today it is a leasurly town at the Rhine River and counts some 15.000 inhabitants.

Both cities are located on the Rhine River in Rhineland-Palatinate and are winegrowing centres.