Go back to "Celestial maps"

Ursa Major (Great Bear of Big Dipper) is well-known in most world cultures and associated with a number of myths.

It lies in the northern sky. Of all the star patterns in the sky, the Big Dipper is the most universally recognized. The dipper’s seven bright stars form a portion of the great bear (see picture)  Polaris, the north star, lies along this line, about five times the distance between the two pointers. 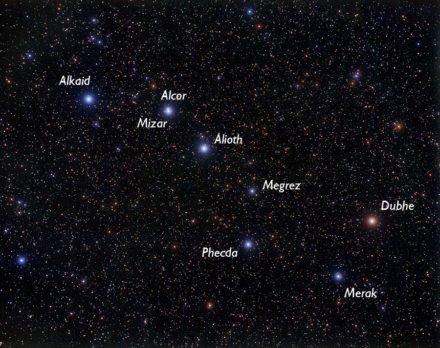 Ursa Major was one of the constellations catalogued by the Greek astronomer Ptolemy in the 2nd century. In Greek mythology, it is associated with Callisto, a nymph who was turned into a bear by Zeus’ jealous wife Hera. The Ancient Greeks identified Ursa Major as a bear – its name is Latin for ‘the greater bear’. However, some historians believe this tradition dates back at least 10.000 years.

This is a rare and extraordinary elephant folio celestial, constellation, or star map of Ursa Major (the Great Bear or Big Dipper) and Leo Minor by Johann Elbert Bode in 1801.

Considered the largest and most dramatic celestial maps of their era, possibly ever published, this is a stars heightened with gold.

Bode’s gigantic star charts detail thousands of stars, nebulae, and clusters. Constellations are dramatically represented in pictorial form, as was the convention of the previous century.

May of  the newly discovered nebulae, double stars, star and clusters recently discovered by European astronomers such as Lacaille, Lalande, Messier, and Herschel, are identified. Bode presents this map on a conic geocentric projection in which most constellations are seen from the front.

Messier 81 discovered by Bode (in the Ursa Major Constellation)

Messier 81 (or M81) was first discovered by Johann Elert Bode on 31 December 1774. Consequently, the galaxy is sometimes referred to as “Bode’s Galaxy”.

Messier 81 (also known as Bode’s Galaxy) is a grand design spiral galaxy about 12 million light-years away, with a diameter of 90.000 light years, about half the size of the Milky Way, in the constellation of Ursa Major. Due to its proximity to Earth, large size, and active galactic nucleus (with a supermassive black hole), Messier 81 has been studied extensively by professional astronomers. The galaxy’s large size and relatively high brightness also makes it a popular target for amateur astronomers.

Bode (1747-1826) was born in Hamburg. His first publication was on the solar eclipse, August 5, 1766. This was followed by an elementary treatise on astronomy entitled Anleitung zur Kenntniss des gestirnten Himmels, the success of which led to his being summoned to Berlin in 1772 for the purpose of computing ephemerides on an improved plan. In 1774, Bode started the well-known Astronomisches Jahrbuch, a journal which ran to 51 yearly volumes.

Bode became director of the Berlin Observatory in 1786, where he remained until 1825. There he published the Uranographia in 1801, a celestial atlas that aimed both at scientific accuracy in showing the positions of stars and other astronomical objects, as well as the artistic interpretation of the stellar constellation figures. The Uranographia marks the climax of an epoch of artistic representation of the constellations. Later atlases showed fewer and fewer elaborate figures until they were no longer printed on such tables.

Bode also published a small star atlas, intended for astronomical amateurs (Vorstellung der Gestirne). He is credited with the discovery of Bode’s Galaxy (M81; see above). Comet Bode (C/1779 A1) is named after him; its orbit was calculated by Erik Prosperin. From 1787 to 1825 Bode was director of the Astronomisches Rechen-Institut. In 1794, he was elected a foreign member of the Royal Swedish Academy of Sciences. In April, 1789 he was elected a fellow of the Royal Society.