Go back to "Collections"

In Collections numbers 1 to 6:

Condition: Good. Sharp  copper engraving. Folds are as published. Old colouring. Here and there some remarks, but generally very good.

Unless otherwise specifically stated on this map page, we charge the following expedition costs in euro:
– Benelux: 20 euro
– Rest of Europe: 30 euro
– Rest of the World: 50 euro

This item is sold

At the beginning of the First Anglo-Dutch War in 1652 de Ruyter had in fact already “retired”. However, the Admiralty of Zeeland appealed to his sense of duty. Even more so, when the Dutch admiral Maarten Tromp died in the Battle of Scheveningen on August 10, 1653, de Ruyter first refused the top job in the Dutch Navy, but he became nevertheless admiral of the Admiralty of Amsterdam. As a non-noble boy from the far-away Vlissingen he was socially miles away removed from the noble elite circles of the newborn country and from its Navy.

Unfortunately, the young Republic was torn apart in a civil war (even with incredible external threats from both England and France): Orangists (in favor of William III, also King of England) against Republicans. De Ruyter was unwillingly placed in the camp of the Republican advocate, Johan de Witt, then Pensionary of Holland… and in practice of the political leader of the Republic. In 1665 Michiel was appointed by the Witt to Admiral of the Navy, much to the displeasure of Cornelis Tromp, son of the late Admiral Martin Tromp and a fierce supporter of William. During 20 year Michiel obtained one naval success after the other, most often against the stronger British navy, but also against the French, sometimes in combination. His tactics and strategy are still study materials in the marine worldwide. This took place against an increasing erupting civil war at home! As we know, the Orangists eventually get the upper hand in the 1670s, and Witt was murdered in 1672. This effectively sealed the fate of de Ruyter. William II sent him on what could only be described as a suicide mission (and Michiel knew this): a naval battle against a vastly superior French opponent in 1676 at Zarda(Syracuse, Sicily). He would not return alive: the French stopped all hostilities when they heard that de Ruyter had died: they opened a solemn row of admiration to let the Dutch fleet sail home.

Facts: The destruction of the English fleet at Chatham in 1667 during the Second Anglo-Dutch War was/still is (one of) the most “triple daring”, “innovative” and “successful” raid(5) in world history.

“Daring” because the English fleet lay at anchor in the deep estuary of the Medway, anchored at Chatham and Gillingham (to be mentioned: at that moment, virtually unmanned and unarmed). “Double daring” because heavy artillery was lined up along the river banks. “Triple daring” because the English ships were additionally protected by a chain under the water line that spanned the entire width of the Medway estuary. [Actually, this chain system had been re-built during the English Civil War to repel a possible attack by the Royalist (!) fleet; replacing earlier versions; its first versions date back to 1585.]

“Innovative” because this raid was carried out by the first “Marines Corps” in world history, of approximately 1.000 men, specially trained for amphibious assaults! Later, such “special forces” would also be developed by other countries. Think of the many US assaults against the Japanese on their conquered islands in the Pacific during WW II.

“Successful” because quasi the entire British fleet and the associated defense at land was destroyed. The fortress of Upnor Castle and the barrier chain called the “Gillingham Line” proved to be unable to protect the English warships. This was also the greatest single defeat of the English fleet in its history (13 ships were lost; HMS Unity and HMS Royal Charles were captured; while the Dutch lost only 4 ships). On 13 June, the whole of the Thames side as far up as London was in a panic – some spread the rumor that the Dutch were in the process of transporting a French army from Dunkirk for a full-scale invasion – and many wealthy citizens fled the city. We know: such invasion never took place! A few weeks later both parties signed a new peace treaty.

War treasure: The English flagship, the Royal Charles (see 2nd picture), was the key spoils of war. The ship was being dry-docked near Hellevoetsluis, but after repeated protests by King Charles II (see final picture), the ship was scrapped in 1672. However, her stern was preserved and still shines (since 1883) as a war treasure in (cellars of) the Rijksmuseum in Amsterdam!

Timing (as argued): Because of the Great Fire of London from 2 to 5 September 1666, the English kingdom, had to anchor its fleet at Chatham, due to lack of money! Also, peace negotiations with the Dutch republic were taking place.

Michiel de Ruyter: Ironically, this assault was/is attributed as the greatest mission of Michiel de Ruyter, although he did not actively take part in this action, due to illness. The practical command was in hands of Cornelis de Wit, while de Ruyter was only involved in the preparation.

Consequences: This raid immediately ended the Second Anglo-Dutch War. As mentioned, a treaty was signed….However, this assault was a serious blow to the reputation of the English crown. Charles II felt personally offended. His resentment was one of the causes of the Third Anglo-Dutch War (1672-1674). 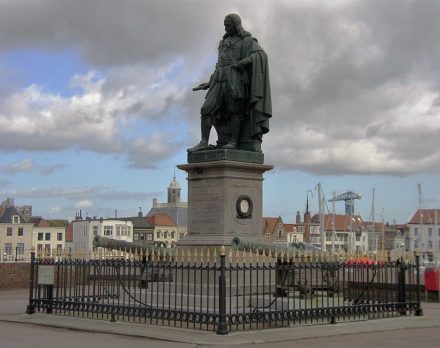