Mughal or Mogul empire by Blaeu

When Babur (coming from Central Asia) defeated the sultan of Delhi at the battle of Panipat (1526), he established an Islam Empire in Hindustan (the plain between the Indus and the Ganges). his dynasty the “Mogul or Mughal Empire” would continuously ever expand where Persian became the culture language and Hindu influences are mixed with Islam culture. 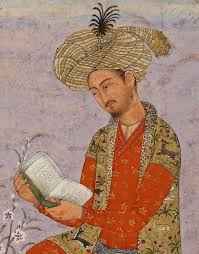 Depending on ruling Moghul, the capital kept on changing where Agra, Lahore and Delhi each took a prominent position. Local maharajahs played an important administrative role. At the end of the seventeenth century frequent wars with the emerging Maratha (based on the Decca plateau) weakened the domination of the Mogul. Finally, under the influence of the British East India Company and its colonial policy almost the entire empire went over in the colonial British India in 1857.

In 1615 (?) sir Thomas Roe (Ambassador for King James I) succeeded to secure from the fourth Mogul Emperor Jahangir (based in Agra) trading rights for the East India Company in Suratte (at the same named river; see also Valentyn, 1726). Suratte would become a directorate of the Dutch East India Company in 1616. The map data are attributed to Thomas Roe (see panting) and William Baffin (the British Explorer of the Arctic and discoverer in 1616 of Baffin Island).

Based on these data Henricus Hondius published a map of “Magni Mogolis Empire” in his Atlas Novus of 1638. This almost identical map from the Appendix of 1640 is the work of Joan and Cornelius Blaeu. The maps by Hondius and Blaeu were a vast improvement on previous ones. For the first time the mouth of the Indus (left) appeared correctly, West of the Gulf of Gambay. The map is rich in toponyms.

At the very top is the Northern Afghan city Balch. Below one can see Candahar and Cabul on Kabul River, a tributary of the Indus. In the East of the huge peninsula of Guzuratte (Gujarat) one notices Gambaya (Khambhat), Suratte and Daman, which formed a territorial Portuguese with Diu unit 1961.

Further south lies tiny Bombaira, more or less at the place where the Portuguese took possession of Bombaim in 1534. The center of the map “India Intra Gangem Indostan” is dominated by Agra (where the fifth Mogul Shah Jahan built the mausoleum Taj Mahal for his – in 1631 – deceased spouse), Dellij and Lahor. The vertical dotted line with villages portrays the Grand Trunk Road, a historic trade route from Kolkata (Calcutta) to Kabul on this continent.

At the right the majestic Ganges delta, colored in green, opens: this area now corresponds to Bangladesh. In the East we notice the city Bengala, now Chittagong, which the Mogul conquered in 1666. All the way at the bottom right lies Aracam, now the name of a region in Myanmar (Birma). East of Bengala a tiny fishing village of Calecota (now Kolkata/Calcutta) is noticeable.

The mythical lake of Chiang Mai in the East with its five rivers goes back to Marco Polo’s travel report. The interior of the continent is decorated with elephants and dromedaries. The cartouche refers to the client who ordered this map: John Huydekoper, member of an Amsterdam noble family.