Founded by the Etruscans in the 3rd century BC as Luk (meaning marsh), it became a Roman colony in 180 BC. In 56 BC (i.e. the midst of the Gallic Wars) Caesar convened Pompeius and Crassus in Lucca … (ultimately) to secure his position as warlord in northern Europe (which had come under fire by some senators.

Several Tuscan towns have completely preserved their walls. You may know Magliano, San Gimignano, Monteriggioni or Grosetto. The perfect ring of more than 4 km of Lucca is also one of them. Construction work on its fourth circle (which we admire today) began in 1513. 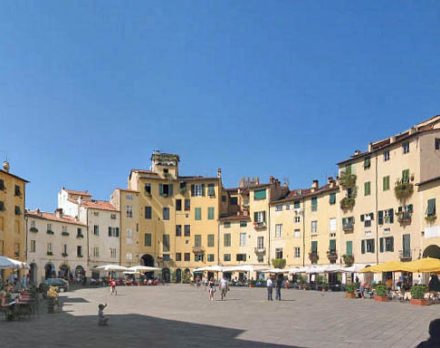 Lucca’s most popular tourist attraction is its oval shaped market place, the Piazza dell’Anfiteatro. This majestic square is the reminiscent of the Roman Amphitheater built in 2nd century AD. According to my son, then 10 years old, here he had his best ever lasagna, and… he still maintains this wisdom.

Another landmark is the Torre Guinigi, dating 14th century (a corner building, two blocks down from the piazza): as one of the few tower houses of the city holm oaks grow on its rooftop: this curiosity really stands out in all respects. In this period, the city flourished under condottieri Castruccio Castracani. 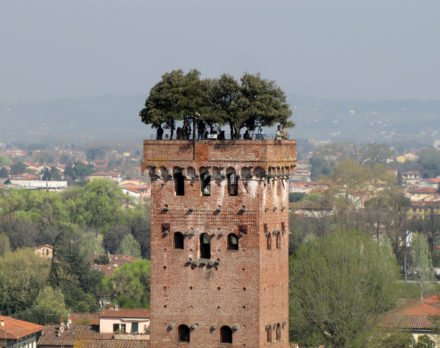 At the bottom middle, close to the city walls the local archbishop seats in the Duomo, a 12th century cathedral dedicated to Saint Martin. 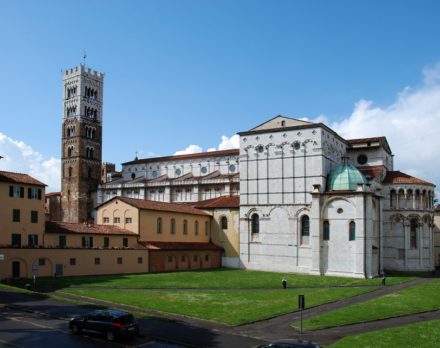 From 1160 Lucca managed, with some intervals and first as a democracy, and after 1628 as an oligarchy, to maintain its independence – alongside Venice and Genoa – until the French revolution of 1789. It painted the word Libertas on its banners. Surprisingly, it could also withstand the Grand Duchy of Tuscany under Medici rule. In 1805 Napoleon Bonaparte created the Principality of Lucca and Piombino for his beloved sister Elisa Bonaparte. It would last until the Congress of Vienna when it was given to and incorporated into the Grand Duchy of Tuscany. In 1858 Giacomo Puccini would be born in the city center. His birthplace can still be visited.

Pierre Mortier was born in Leiden in 1661. He was the father of Cornelis Mortier (1699–1783), who in partnership with Johannes Covens I (1697–1774) began the map publishing company Covens & Mortier (1721–1866).  He traveled to Italy and mentioned on this map “Dessinée sur le Leieu en Mis au Iour Par le Soin de Pierre Mortier. Avec Privilege.” The main buildings have beautifully been are put in relief.