Go back to "British Isles"

Dimensions (not including margins): 38 cm by 51 cm

From: Theatre of the Empire of Great Britaine

The 1676 edition map of Herefordshire by John Speed, and published by Bassett & Chiswell in London. A decorative English county map, embellished with strapwork title cartouche, an early detailed town plan of Hereford, six coats of arms of local nobility, and a delightful vignette on the famous ‘War–of-the-Roses’ battle at Mortimer’s Cross on 2 February 1461. The opposing forces were an army led by Jasper Tudor and his father, Owen Tudor, and other nobles loyal to Kind Henry VI of the Lancaster House and the army of Edward, Earl of March. The latter won a hard-fought victory and went to London for his coronation to Edward IV. 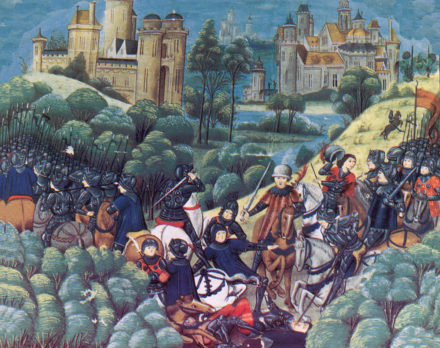 The vignette shows the omen seen before the battle: three suns (a phenomenon known as a sundog, or parhelion) that appeared in the sky.

A pair of scholars adorn the two lower corners of the map. The local ‘hundreds’ are coloured in outline, many places are named and identified, rivers, parks, hills, forests are all well engraved and attractively presented.

The full title of the map is “Herefordshire described With the true plot of the Citie Hereford as alsoe the Armes of thos Nobles that have bene intituled with that Dignitye”.

John Speed (1551 or ’52 – 28 July 1629) was the best known English mapmaker of the Stuart period. Speed came to mapmaking late in life, producing his first maps in the 1590s and entering the trade in earnest when he was almost 60 years old.

John Speed’s fame, which continues to this day, lies with two atlases, The Theatre of the Empire of Great Britaine (first published 1612), and the Prospect of the Most Famous Parts of the World (1627). While The Theatre … started as solely a county atlas, it grew into an impressive world atlas with the inclusion of the Prospect in 1627. The plates for the atlas passed through many hands in the 17th century, and the book finally reached its apotheosis in 1676 when it was published by Thomas Bassett and Richard Chiswell, with a number of important maps added for the first time.

The Hereford Mappa Mundi is a medieval map of the known world, of a form deriving from the T and O pattern, dating from c. 1300. I

The O stands for the water surrounding the landmass. The T stands for a division of the landmass in three parts: Asia, Africa and Europe. Jerusalem lies at the centre of the world.

The map is displayed at the Hereford Cathedral. It is the largest medieval map still known to exist. Drawn on a single sheet of vellum, it measures 158 cm by 133 cm. 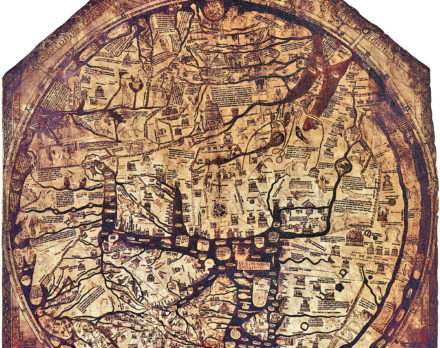